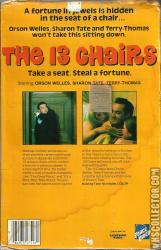 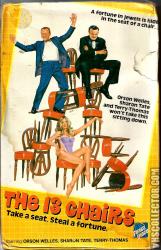 A fortune in jewels is hidden in the seat of a chair...

Someone's Sitting on a Fortune!

Sharon Tate, in her last movie, finally released to the public!!


The Thirteen Chairs (12 + 1 - original title and Italian release title) is a 1969 comedy film based on The Twelve Chairs, a 1928 satirical novel by the Soviet authors Ilf and Petrov. It was directed by Nicolas Gessner and Luciano Lucignani, and starred Sharon Tate (her last film before her death), Vittorio Gassman, Orson Welles, Vittorio De Sica, and Tim Brooke-Taylor.


Mario Beretti is a young Italian-American philanderer, who has migrated to New York City. He is also a Barber. He runs a Barber Shop by a construction site that boasts few customers. His life reaches a turning point when he is notified of the death of his aunt living in England, who named him her sole heir.
Mario rushes to England, and learns that his inheritance consists of thirteen antique chairs. He sells them in order to cover his transportation costs, but soon learns from his aunt's last message, that inside one of the chairs is a fortune in jewels. He tries to buy back the chairs but is unsuccessful in doing so. With the help of a lovely antiques dealer living in London named Pat, the two then set out on a bizarre quest to track down the chairs that takes them from London to Rome. Along the way, they meet a bunch of equally bizarre characters such as a driver of a furniture moving van named Albert; a prostitute named Judy; Maurice, the leader of a traveling theater company that stages a poor version of Dr. Jekyll and Mr. Hyde; the Italian entrepreneur Carlo Di Seta; and his vivacious daughter Stefanella.
The bizarre chase ends in Rome, where the chair containing the money finds its way into a truck, and is collected by nuns who auction it off to charity. With nothing much left to do as a result of the failure in his quest, Mario travels back to New York City by ship, as Pat sees him off and waves goodbye to him.
The film ends with Mario returning to New York City, and to his Barber Shop. His friends over at the other (and more lavish) shop join him, as do two construction workers, and his last customer Randomhouse. It is there that Mario makes a strange discovery: Shortly before his departure for Europe, he invented a way to make hair regrow miraculously. He then laughs evilly over his discovery.

Filmed from February–April 1969. [1]
Because the script for Tate's scenes called for several semi-nude scenes, the director arranged to film those scenes first. As filming (and her pregnancy) progressed, the director obscured Tate's stomach with large purses and scarves. This is most apparent in the scene following her ride in the furniture mover's van.
In response to her recent murder, Tate received top billing for this film (this film was released posthumously). In addition, several of her other films (including Valley of the Dolls) were reissued to give her top billing on the theater marquees.


The film is extremely hard to find on VHS. It was released through rental only by Force Video in 1986 under the Thirteen Chairs name, and again a year later by Continental Video, under the original 12 + 1 name. On 12 March 2008 the film was released on DVD in Italy by 01 Distribution. This version is in Italian, lacks English subtitles, and doesn't include an English audio track.


Mario, a young philanderer, receives 13 antique chairs in a bad state by inheritance and decides to sell off them to get some money. Afterward he gets to know that one of them contains documents worth a lot of money. So he begins an adventurous trip to regain possession of the chair. On the way he meets many strange people who try to either help or swindle him.